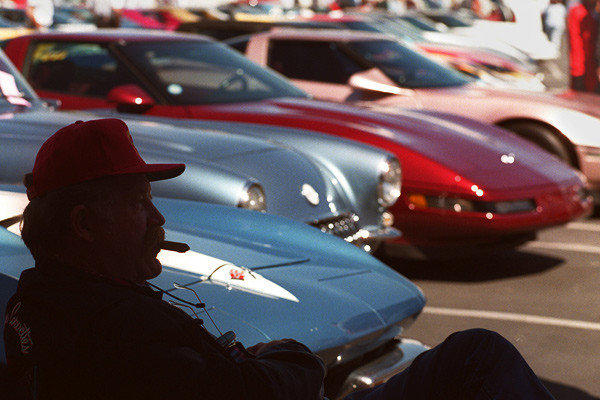 Dave Metivier sits among the approximately 300 Corvettes on display at Peterson Automotive Museum in this 1996 photo. (Los Angeles Times)

Next year is shaping up to be quite eventful for Chevy’s iconic Corvette. Not only will the all-new seventh-generation model debut ahead of the Detroit Auto Show in January, but throughout the year the car and those who love it will be celebrating the Corvette’s 60th anniversary.

Los Angeles’ hometown Petersen Automotive Museum will be hosting one such event.

On March 1 and 2, the museum will host a gala, a car show with some 500 Corvettes, value seminars, racing panel discussions and restoration seminars.

Meanwhile, inside the museum will be displayed a collection of 20 of the rarest Corvettes made over 60 years, including the world’s first Corvette, known as EX-122. This exhibit will be open to the public from Feb. 27 to March 31.

Click here for a complete schedule of the events and details on ticket prices.

If you don’t want to wait until 2013 to start celebrating the Corvette’s 60 years, you could always run out and buy a 2013 Corvette 427 anniversary edition. We recently tested it, and found there’s plenty to like.