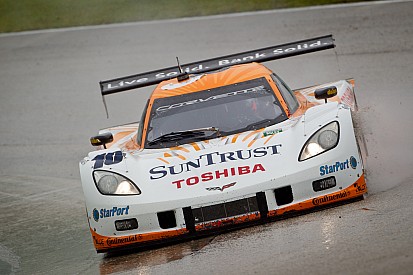 Angelelli started last in the nine-car Daytona Prototype field and worked his way up to third before handing the SunTrust Corvette over to Taylor on lap 21, during the third of the race’s four caution periods. Taylor rejoined the race in third, behind Richard Westbrook and Enzo Potolicchio. Seven laps later, Potolicchio collided with Westbrook, sending the latter spinning off the rain drenched track. Rolex Series officials assessed Potolicchio a stop-and-go penalty for avoidable contact. When Potolicchio served the penalty on lap 28, Taylor assumed the lead and held it until the race was called on lap 54.

The race started under a yellow flag due to hard rain and standing water on the track. Persistent rain and poor visibility led to 24 of the race’s 54 laps being run behind the pace car under yellow flag conditions. The rain was so bad that many of the areas around the track were under flood warnings put out by the National Weather Service. 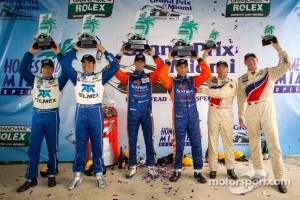 “This is very nice,” explained Angelelli. “We are very happy. The team had great strategy.”

Scott Pruett and Memo Rojas finished second in the Ganassi Racing BMW Riley despite suffering a broken windshield wiper early in the race. They now hold a two-point lead over a quartet of Starworks drivers in the Daytona Prototype drivers’ championship.

The No. 2 Starworks entry shared by Lucas Luhr and Alex Popow claimed the final step on the podium, followed by the Spirit of Daytona Corvette of Westbrook and Antonio Garcia and the second Starworks car driven by Potolicchio and Ryan Dalziel.

The Daytona Prototype class has seen three different winners in as many races this year.

The AIM Autosport Ferrari 458 of Jeff Segal and Emil Assentato won the GT class. Second went to the No. 42 Mazda RX-8 shared by Dane Cameron and Wayne Nonnamaker. John Edwards and Robin Liddell ended up third in class in the Stevenson Motorsports Camaro GT.R. The No. 67 Racer’s Group Porsche and the Turner Motorsport BMW M3 rounded out the top-five in GT. 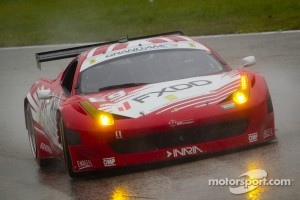 “It’s absolutely fantastic to get Ferrari its first win back in the Rolex Series in only our third race (of the season),” said Segal. “It was really treacherous at the end, but we got some fun racing in.”

The Rolex Series will return to the track May 13 at the New Jersey Motorsports Park.